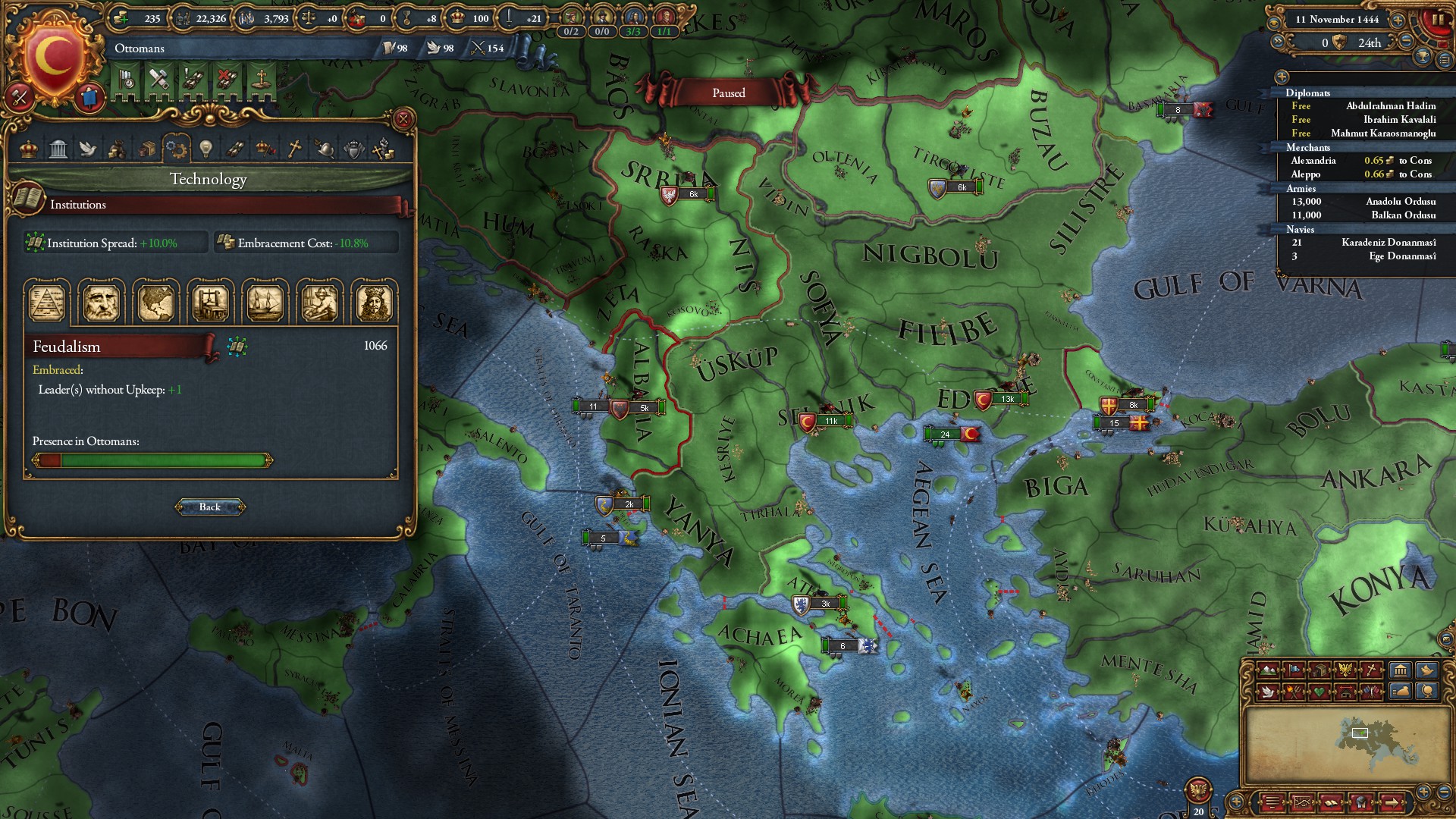 Arguably the largest change to any EUIV system since its launch back in 2013, Rights of Man (RoM) has completely overhauled the technology system into something malleable yet perfectly placed for the historic nature of the game. No longer will European nations hold complete technological domination over their non-Western neighbors, thanks to the newly instituted Institutions system.

Institutions give players outside of Europe a chance to maintain the technological edge during the entirety of the game’s 300+ year time line. Before, non-Western powers would have to constantly contend against prohibitively expensive technology gates until they went through the painful process of westernization. While being somewhat true to history, tech in EUIV always felt like it was penalizing players for choosing a non-western nation. That was a shame.

RoM finds early institutions, like colonization and the printing press, spawning within the familiar confines of Europe. Yet, as the game progresses through the Age of Discovery, countries outside of Europe have a better chance of seeing manufacturing or the Enlightenment begin in say, Constantinople, Kyoto, or Delhi.

This is a seismic shift for the series. Institutions give countries a general freedom when pursuing technological parity with the West. Paradox Interactive has learned from their past games that historicity is paramount to the success of their Grand Strategy Games, but you have to cede the mantle of historical revisionism to the player. Fans of EUIV will never look back. 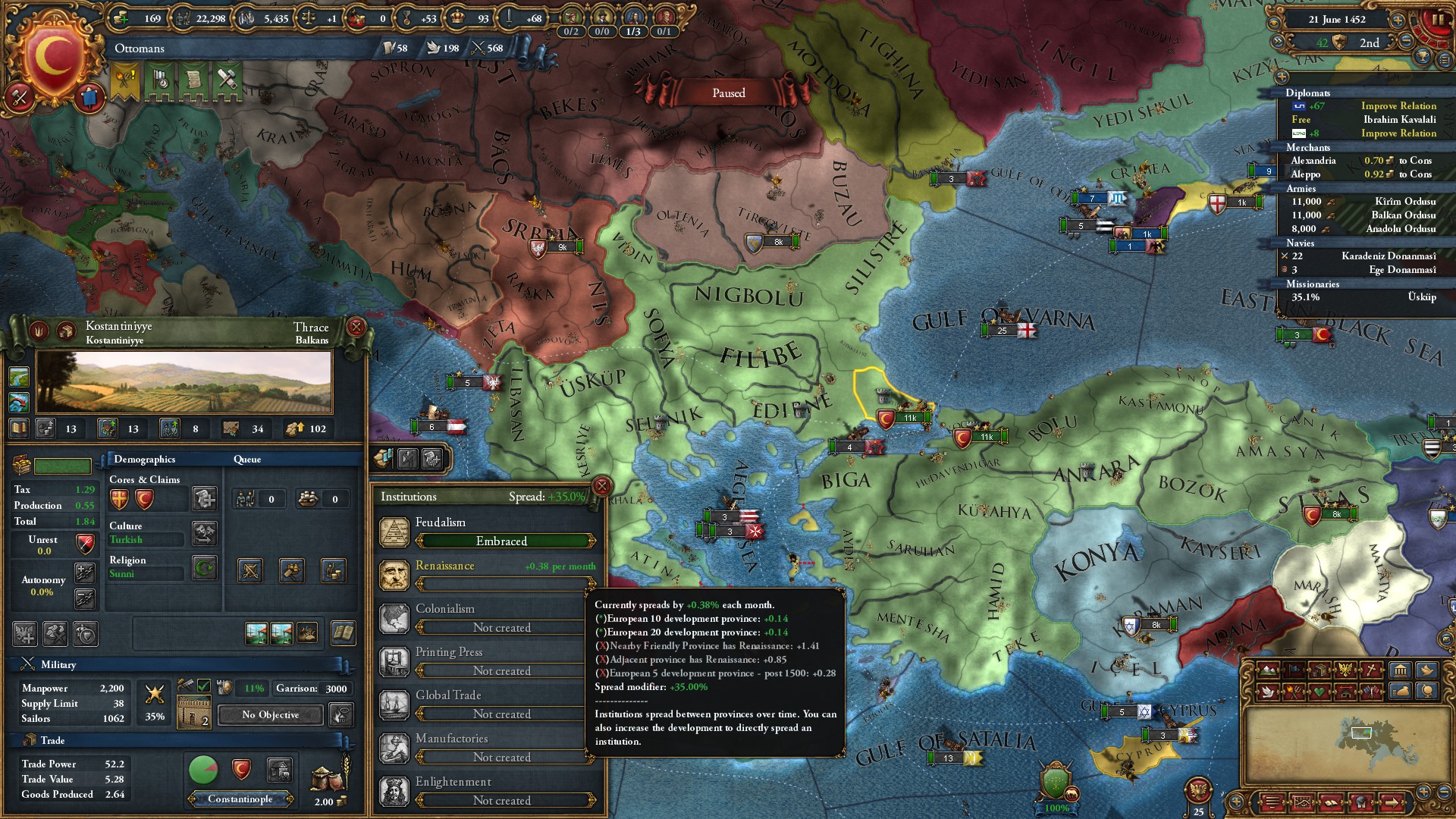 Not always clear what the numbers mean.

Still, the information about how to either activate or enhance your institution and its subsequent spread is opaque for the player. It’s not always clear if I need to add more development into a certain province, be in Europe, or enhance a port or trading post to further buff my institutional spread. Sounds tasty.

Regardless, Institutions in RoM add depth and flexibility to a system that has remained essentially unchanged in the last few iterations of the base game.

It’s hard to state just how big this change is to the overall feel of Europa Universalis IV: Rights of Man. The various changes outside of the new institution system are effective yet minute stuff compared to this massive overhaul of the tech system; which so many players have come to, mostly, tolerate. Yet, there is still is the rest of the RoM additions and features.

Europa Universalis IV: Rights of Man adds little bits and pieces from prior Paradox strategy games. It’s a pastiche of what worked and what works even better in the EUIV system.

You want to play a little hardball with your less than powerful neighbors? Well, if you are sufficiently powerful then your country can crack into the top eight great nations list. The addition of great powers gives EUIV a Victoria II feel but it completely makes sense here. So often the games of EUIV felt like you weren’t being properly rewarded for your world-conquering ways. This is true no longer.

Being able to influence nations that aren’t great powers is the beautiful type of soft-power that makes sense in a globalized world. Also, paying off the debts of a country that you want to have join your side in a war is so rewarding. 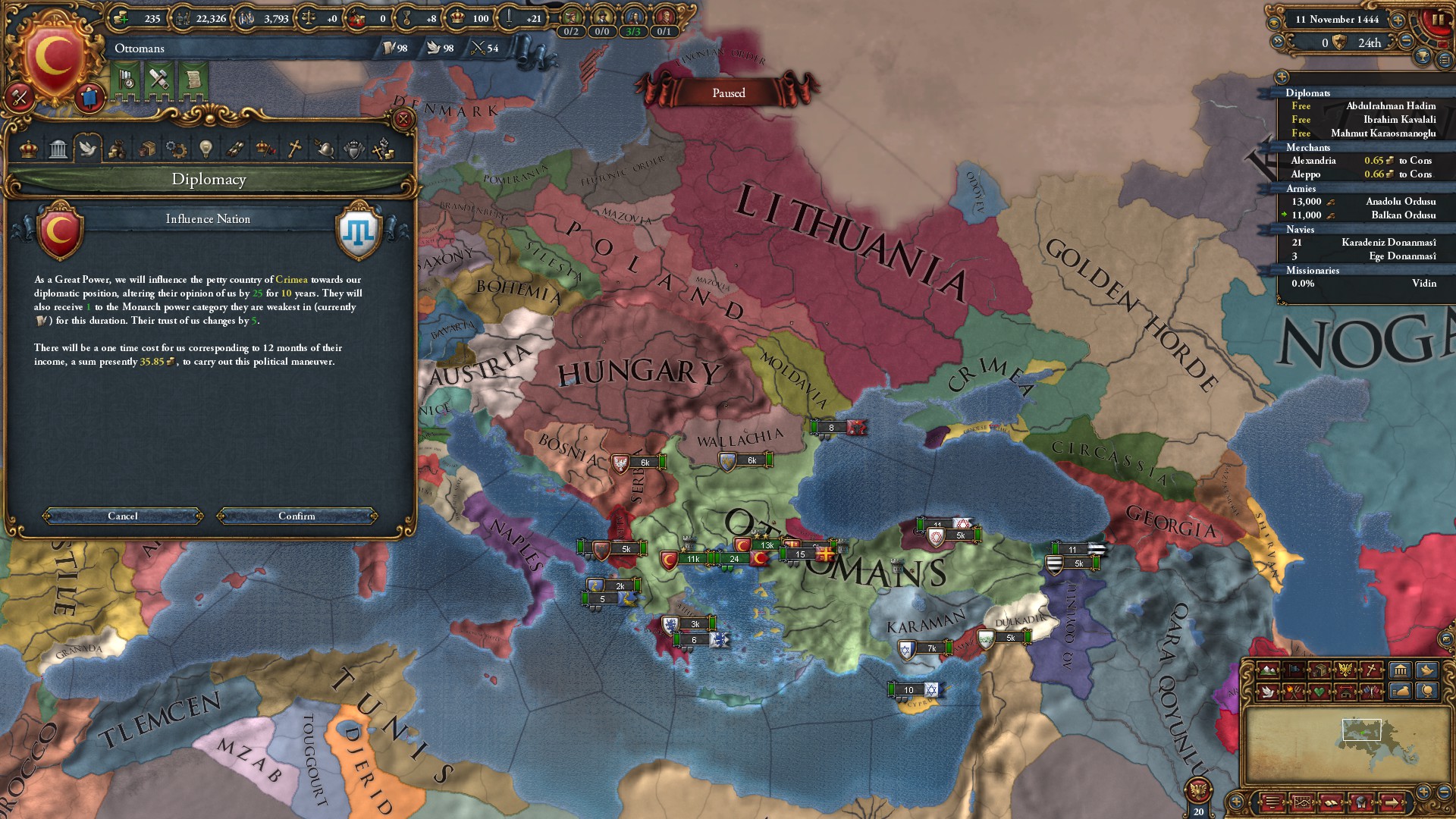 You will be mine, Crimea.

Great Powers are a welcome addition to Europa Universalis IV: Rights of Man. It makes the stronger countries more enticing while also giving everyone else a convenient barometer for where the world power is held and what it takes to jump in with the big players. 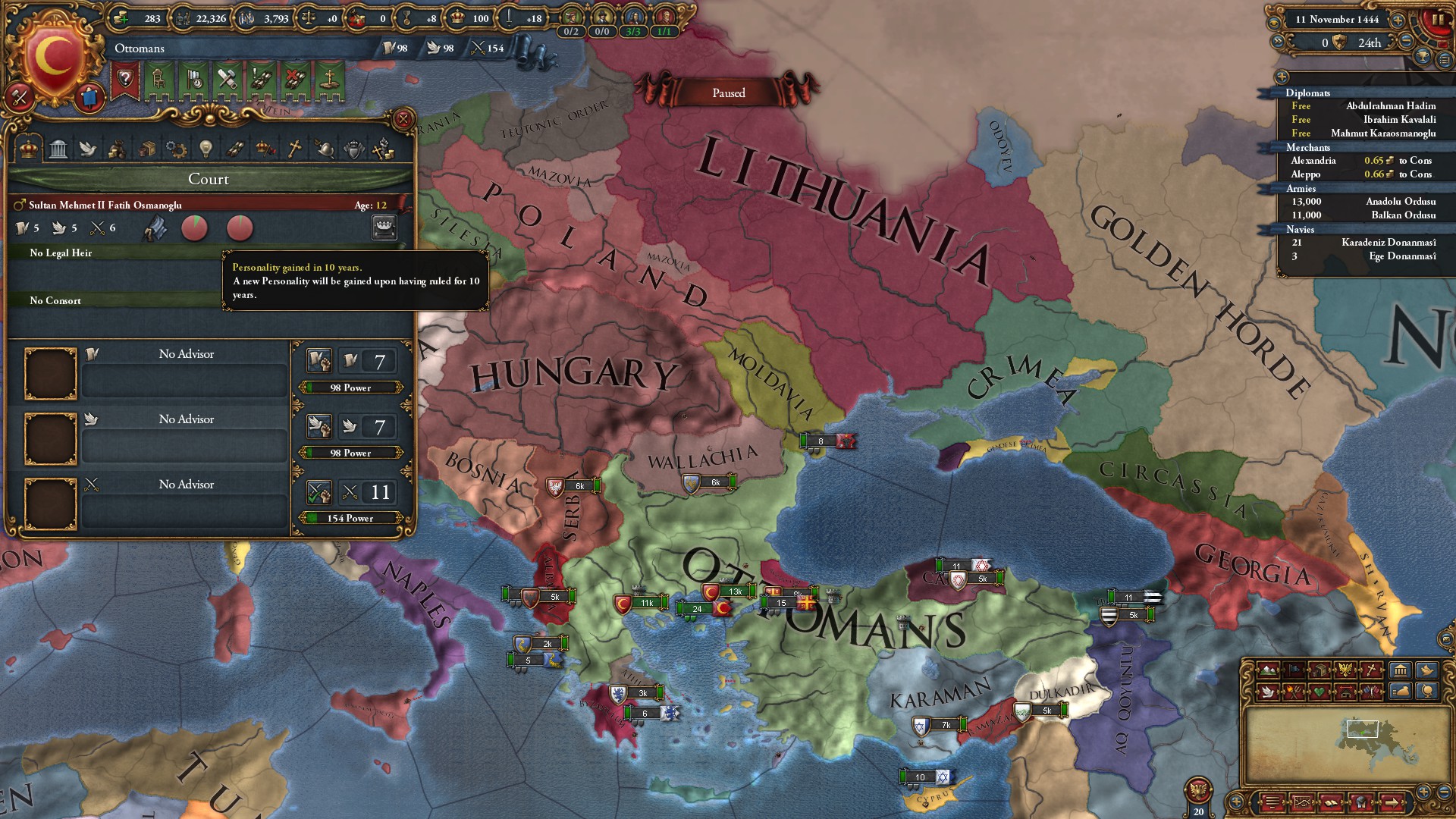 Personality traits are gained every 10 years.

So, you like Crusader Kings II ? Don’t worry, RoM has a little bit of random character madness for you.

Yes, in the style of CKII, EUIV now has your leaders, heirs, consorts, and to a lesser level your generals, developing positive or negative personality traits at prescribed intervals. You aren’t able to directly influence what type of traits your country’s best and brightest, or most inbred, can adopt but you can laugh at the scenarios that sometimes appear.

Whether your 16 year old leader has just earned the babbling buffoon, craven, or fertile trait, to name just a few, you will have to suffer the consequences or squeal in glee as your leader gains the Immortal trait. All of these traits will change how the AI also plays which adds another layers of interesting interactions and strategic thought.

Not to be left out, military leaders can also earn certain battlefield traits. These traits are all positive and must be earned on the battlefield.

It’s a great time to be alive and playing highly detailed and time-consuming Grand Strategy Games. Europa Universalis IV: Rights of Man is firing on all cylinders with this latest expansion – and that’s not even mentioning the vast amount of free features, bug fixes, revolutionary republics, and so many more wonderful features [source]. At times information is hard to find, and the sheer amount of tabs has led to an even more crowded menu and sub menu nightmare. It’s not a perfect expansion but it’s closer than any prior expansion to date.

With an asking price of $20 USD, you would be hard pressed to not pick up this latest expansion. It changes the game in so many fundamental ways, both big and small. Players are getting features from some of Paradox’s best strategy games which are integrated seamlessly into the systems already in place in EUIV. RoM is that rare expansion that adds so many small fixes and additions that it feels holistically developed. But to then include the overhaul of the technology system and you’ve got yourself one worthwhile expansion.