To commemorate the 20th anniversary of Harry Potter and the Sorcerer’s Stone, Cinemark theaters will be holding a movie marathon starting August 31 just for Potterheads.

The marathon is set to include all eight films plus Fantastic Beasts and Where to Find Them. 141 theaters across the United States will screen the films from August 31 through to September 6. The marathon is part of Cinemark’s Wizarding World XD week. The company’s XD auditoriums come fashioned with 35 trillion colors and custom engineered sound. 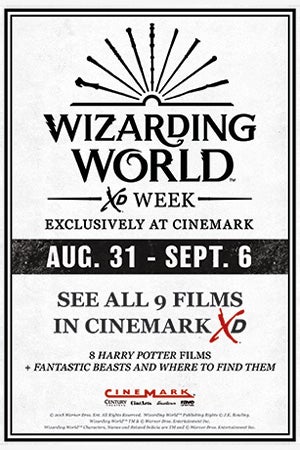 Tickets will cost $5 per film or $25 for the Festival Pass. The Festival Pass comes with tickets to all nine films along with a collectible keychain, a commemorative festival badge, and a $3.50 specially designed cup that is refillable all the way through to November 30 at all Cinemark theaters.

This isn’t the first time a Harry Potter marathon has popped up. Many theater chains did a marathon run leading up to the release of Fantastic Beasts and Where to Find Them. It is likely more will pop up before the release of Fantastic Beasts: The Crimes of Grindelwald this November. At the very least, there will be double screenings of the two Fantastic Beasts movies for fans. More recently, SyFy and the USA Network hosted a joint ‘Harry Potter Wizarding Weekend‘, which split up all eight movies over the two networks.

Fantastic Beasts: The Crimes of Grindelwald is the next film under the newly christened “Wizarding World” banner and not only looks to explain the backstories of Albus Dumbledore and Gellert Grindelwald but also that of Nicholas Flamel. Fans may also finally be getting their answers as to what Dumbledore sees when he looks into the Mirror of Erised (as teased at in the newly released Comic-Con trailer) and how new character Credence may fit into the Lestrange bloodline.