A while back, a Justice League/Power Rangers crossover was announced. As a result of damaged teleporters, the black ranger finds himself in the DC universe. While the other five rangers come to rescue him, they find themselves in conflict with the Justice League. If you’re wondering why they’re fighting, you probably don’t understand how crossovers work.

Yet hero vs hero can’t carry an entire crossover so who will the heroes fight when they team up? It’s been revealed that Lord Zedd will be the villain from the Power Rangers side. Lord Zedd took over from starter villain Rita Repulsa and established his cred by destroying the Ranger’s Dino Zords. Due to Power Rangers being a kids show, he lost week after week yet he had a great start.

Lord Zedd’s menace looks like it’s going to be reset to factory settings in the crossover however. Preview pages show Zedd breaching the Ranger’s command centre, something that was season finale material in the tv show. 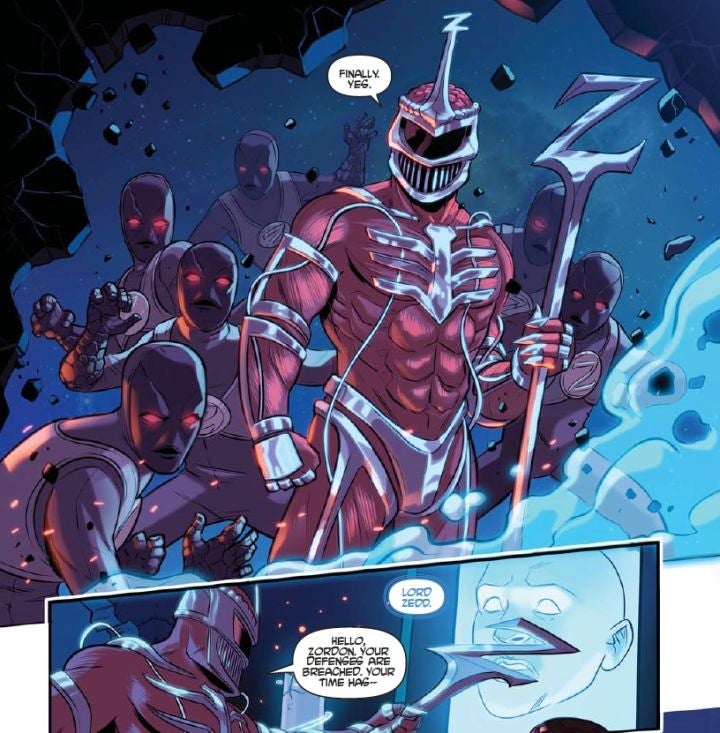 ‘You didn’t hear me knocking, so I knocked harder,’

Yet a crossover doesn’t just mean heroes teaming up, villains do too. According to Inverse.com:

“Tom Taylor and artist Stephen Byrne confirm that the mortal enemy of the Power Rangers, Lord Zedd, will team up with a yet-to-be named DC supervillain, prompting the Power Rangers to eventually work alongside the iconic Justice League.”

Who the DC villain is, however, is a bit more of a guessing game given how many there are. Whoever they are, Taylor says they won’t appear until the second issue:

“[Lord Zedd] is going to be causing of a lot of trouble,” says Taylor. “But there will also be a villain from the Justice League’s dimension who will be part of the problem as well. That won’t be revealed until about Issue #2.”