When the first Mario & Sonic game was announced, the heads of the gaming community spun. Here, at last, the two most iconic platformer franchises could do battle against each other.

Of course, by ‘battle’, we mean compete in the olympics together. So you have Sonic sportingly running at non-supersonic speeds as he does the 100m against Peach. You could also have Knuckles compete against Donkey Kong at Javelins. And there must be many who want to see Luigi take on Amy at the hurdles. This sort of competition is maybe not the platformer or beat ’em up we were hoping for, but it would have to do. 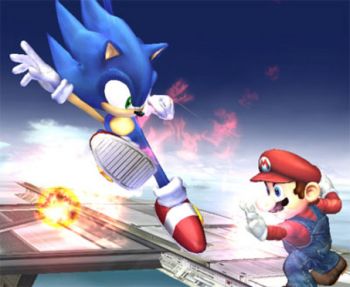 Until ‘Brawl’, that was…

The franchise proved popular enough to merit sequels. The party friendly gameplay combined with the illusion of doing exercise was a potent combination. The last installment of Mario and Sonic was set at the 2014 winter games in Sochi for the Wii U and was met with mixed reviews. Although still probably better than the actual Sochi games.

So with such a long time since a previous installment, many people had probably forgotten about the franchise altogether.

So just about everyone was caught off guard when Mario & Sonic at Rio 2016 was announced a little while ago. Events confirmed so far include, soccer, golf, beach volleyball, and track and field.

Gamers who were around during the 16-bit console wars never thought that Mario and Sonic would ever even appear in the same game. Never mind multiple games. It’s definitely a good time to be a gamer.

No release date has been given.