Steam, in their Pavlovian wisdom, have provided gamers with three great games to play for free this weekend; forgive me, productive self.

The three games in question will gleefully erase your free time this weekend, and you’ll be thanking them for the opportunity when all is said and done. You need to act fast because these deals will only be available until August 30th.

To start, ARK: Survival Evolved is the newest of the three free games but has already become insanely popular thanks to YouTube and the love of all things survival… and dinosaurs. ARK is still the full $30 but that shouldn’t stop you from using every minute of your weekend to ride dinosaurs and craft items in this early access game. 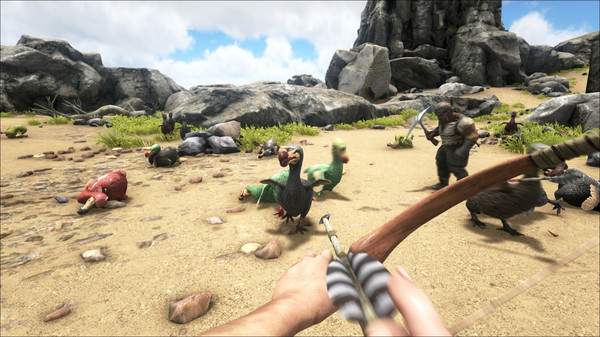 They might go extinct if you keep that up

What would compliment a rabid dinosaur survival game? Of course it would be the WWII themed, real-time strategy game, Company of Heroes. This weekend the entire COH franchise is free and ready to be your next best addiction. On top of that, every game in the franchise is 75% off making this the best time to jump in and command some of the most heroic soldiers from WWII.  These games are regarded as some of the most beloved RTS games of this generation and still have a very lively multiplayer scene — so, you should be playing these games.

Finally, Steam has pushed Mount and Blade: Warband into our sweaty hands this weekend. The least popular of the three titles, Mount and Blade is still an excellent game that has been overlooked in the mainstream gaming market. With an engrossing campaign and amazingly tense multiplayer, MoB is a game that “brought medieval battlefields to life with its realistic mounted combat and detailed fighting system”(Steam). Like Company of Heroes, MoB is also being reduced, only by 50%, allowing gamers the perfect opportunity to jump into this excellent medieval strategic combat brouhaha

What will you be playing this weekend? With three great games for free, you need to act fast because this deal will be gone by Monday. Happy weekend, everyone.

Borderlands Arrives on The Switch Today

Spirit Oath Casts Itself Onto PC On June 2nd

How Fast Can You Reach Level 60 in Classic WoW? Speed Leveling Guide