Monday is officially Stellaris day — well, until the game is actually released. It’s upon us once again, and this week the devs haven’t disappointed us with the wealth of their knowledge.

Stellaris wants to have AI that acts an reacts in natural yet semi-predictable fashion. How is this done? Like many expansive strategy games before them: artificial personalities. With these artificial personalities, players can expect to meet an expansionist/xenophobic empire that, obviously, loves to expand and wants to keep their alien race pure. Since all races will have randomly generated traits and ethos(es) the team working on the AI didn’t want all interactions with new aliens to be simplified to military alien or pacifistic alien. The game needs more nuance. Accordingly, each race is designated a sort of “alien trope”, a type of alien personality you might be used to seeing. Kinda goes against the whole notion of “alien”  but oh well. 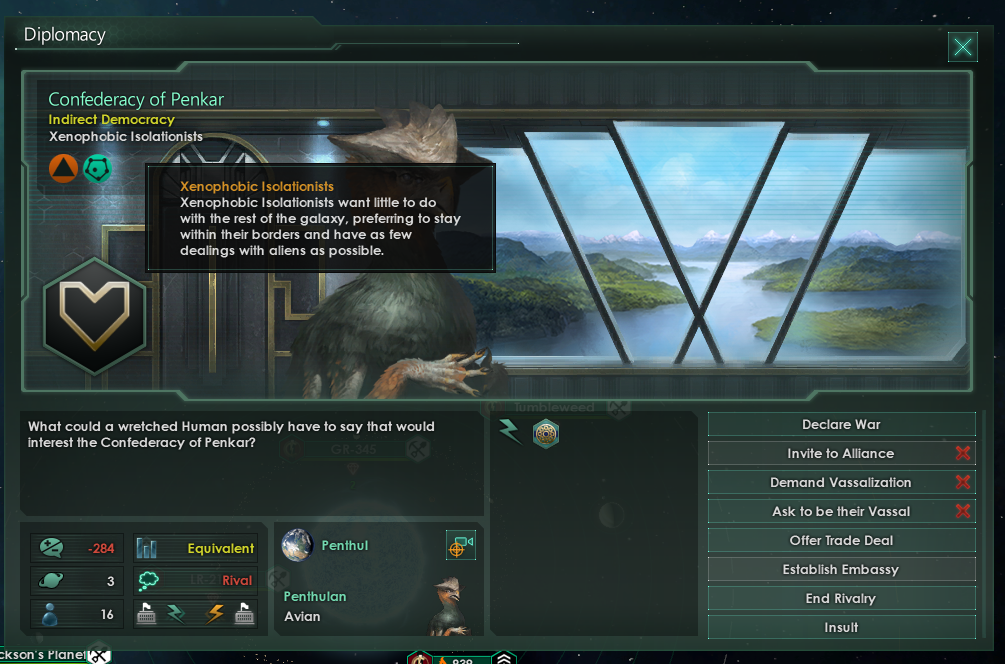 Xenophobic Isolationists are my favorite

There’s also something called a Fallen Empire personality set. Think of the Forerunners from the Halo Universe or the Protheans from the Mass Effect games. Fallen Empires are here to throw a wrench in your plans, as Wiz explains:

Fallen Empire has only a single Fanatic Ethos – the single remaining ideal they hold to after centuries of seeing what the galaxy has to offer. This Ethos determines their personality, which in turn affects how they view your actions. For example, a Xenophobic Fallen Empire will want nothing to do with you or anyone else and will be very upset if you start encroaching on their borders, while a Spiritualist Fallen Empire will consider themselves the protectors of the galaxy’s holy sites, and will not look kindly on your colonists trampling all over their sacred planets.

One of the ideas behind having all of this interesting AI is to promote the idea of threats, or the main way that wars and conflicts will start. These threats function similarly to aggressive expansion in the Europa Universalis games. Essentially, the more planets you destroy, the more people you enslave, and the more power you project the larger your threat will become to other empires. This is dependent on proximity to other empires as well as that empire’s reigning ethos and focus. An isolationist empire isn’t going to care too much about your warmongering ways… initially. As the Wiz says, “expand with care”. 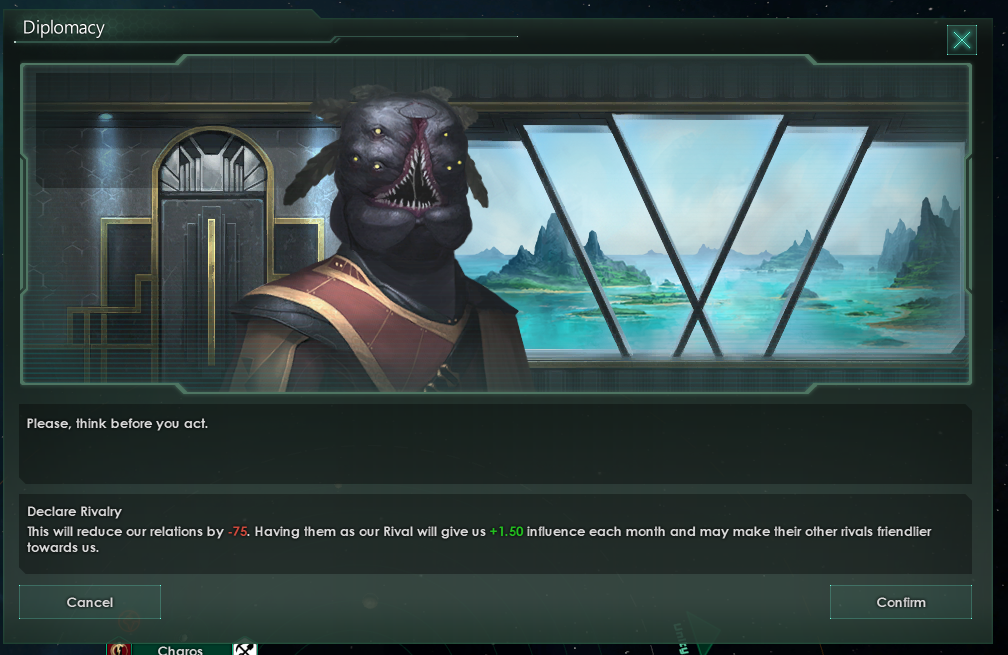 A fierce rivalry with this toothy thing

The other feature mentioned is the Rival system. Rivals will work almost exactly as they have in Europa Universalis (seeing a trend?) You will gain bonuses for rivaling a major neighbor and your people will usually enjoy such spirited competition. Be careful; rivaling the wrong empire will almost always result in your peoples being rivaled back.

The last point of interest if the AI Economics. And yes, you need to pay attention as this will be on your final!

AI economics is essential in maintaining yours or a friends empire when you step away from the game. The ability for the AI to properly execute orders and prioritize incoming events is key to making the replayability of Stellaris seemingly infinite. Once again the Wiz will explain the nitty-gritty:

Every single mineral and energy credit that the AI takes in is earmarked for a particular budget post such as navies or new colonies, with the division between the posts being set according to the AI’s personality and what it needs at the time. The AI is only permitted to spend appropriately budgeted resources, so it’ll never fail to establish new colonies because it’s too busy constructing buildings on its planet, or miss building a navy because mining stations are eating up its entire mineral income. In times of dire need, it can move resources from one budget post to another – if it’s at war and its navy gets destroyed, expect it to pour every last mineral into building a new one. When making decisions about what to construct, the AI looks primarily at what resources it has a critical need for (such as Energy if it’s running a deficit), secondarily at what resources it’s not producing a lot of compared to what it expects an Empire of its size to produce, and lastly at whatever it deems useful enough for the mineral investment. 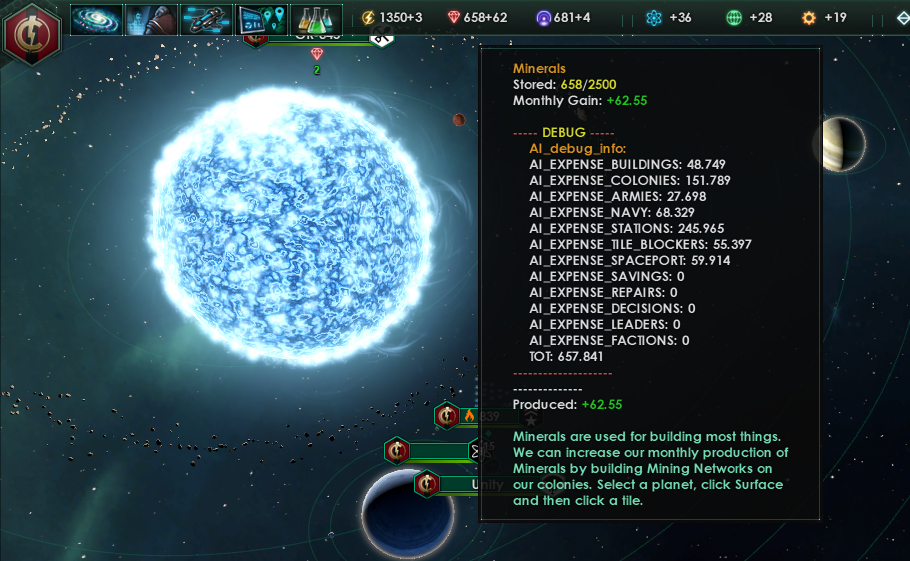 A debug view of AI logic

So, that was a lengthy dev diary but a worthwhile one. What do you think of the gameplay being implemented in Stellaris? Let us know in the comments below.