Evolve: The Marathon Review (Xbox One) Visual
Gameplay
Atmosphere
Amazing
All the thrills of the hunt with none of the costly trips to the E.R.

Let me start out by saying that I thought playing Evolve for 8-12 hours was going to be an ordeal. I made sure to get plenty of sleep the night before and had plenty of supplies. 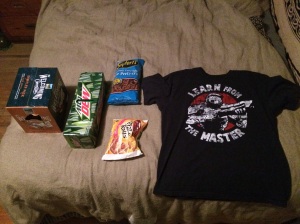 I steeled myself mentally with coffee and prayers to Marionus, Roman god of gaming. I practiced a special sort of yoga that involves only thumbs and kegels. I was prepared for anything.

This article was dreamed up as a journey we would take together that would end with me in a sobbing heap on the floor and you enlightened on the finer points of Evolve.

And then I played for eight hours without taking a break.

The hardest part of my one-man Evolve opening day marathon was making myself take a nap after about ten hours.

This is a seriously great game, you guys. Let me tell you why…

My intent was to get started brght and early at 8 am. So I got up at 7 and ran to the store for some supplies and breakfast. I didn’t feel like cooking anything, so I got some donuts that sort of looked like the worst egg and sausage you’ve ever had. 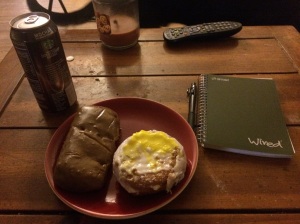 If you squint really hard.

I fully expected to have time to eat that as the first game loaded. After all, it was opening day and anyone who’s ever bought a multiplayer game on opening day will usually tell you, “Don’t! Oh dear god why didn’t anyone warn me? The wait times! THE WAIT TIMES! BLRRRGGHHHHRBBLRBLLBR!!!” Also, I saw a raven in the Kroger parking lot when I was getting my breakfast, and that seemed like a bad omen. 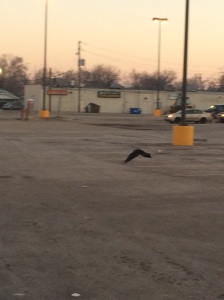 But Evolve followed through on the promises made by the beta and connected me to a game pretty quickly. I had to leave sausage-donut partially uneaten.

I played the beta, so I had several classes unlocked already. Three Monsters, all Medics, and all Assault. However, my levels and perks were reset, so take that as you will.

The win balance between the Monsters and Hunters in the beta was insanely balanced. I don’t remember the exact numbers, but it was something like a 51%/49% split. Turtle Rock obviously wasn’t satisfied with this balance and today reported an even more impressive 50.1%/49.9% (Hunters favored); which you may recognize as literally the closest those numbers can be without being a straight 50/50 split. That’s damn impressive.

The most noticeable change for me was the nerfing of the Wraith. While most Monsters are almost guaranteed to beat you when they reach Stage 3, the Wraith is squishy enough now that it’s a toss-up. Which is honestly fine because the Wraith is so evasive that you should almost always be able to reach Stage 3 with her. 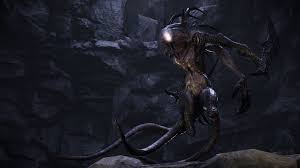 Another big change was that they got the game chat working. I don’t know if it didn’t work during the beta, or if I just got stuck with quiet players every time, but this was the first time I’d spoken to people who I wasn’t in a party with. Communication is huge in this game, so that is a nice perk. However, you always run the risk of being put into a game with know-it-alls who will question and bash your every move (“Ugh… Parnell sucks. Why would you ever pick him?”) or screamers (“HRRRKMLERGERLER!!!!”) or you’ll get stuck in a hunt with some bad blood carried over from previous games where your teammates will be arguing the whole session. Or you could end up with all three in one game, like I did. Luckily, there is no penalty for leaving a lobby.

The matchmaking system is excellent. Games are found relatively quickly and with little trouble. I only experienced crippling lag once or twice and was only dropped from maybe three or four games. There were some minor layering issues with the graphics for a couple games and once I clipped through a wall I was climbing and fell off into Limbo. In the grand scheme of things, I’d call those minor inconveniences. Especially for release day.

Evolve includes two game modes so far: Evacuation and Skirmish. Evacuation games are reminiscent of the Left 4 Dead style where you will run five missions (think the Chapters from L4D) that will culminate in a final showdown in mission five. Evolve’s twist on this is that each individual mission comes with consequences for the next one. These consequences are two fold: 1) The outcome determines which map modification will appear in the next round (the water is fulled with man-eating eels, satellites bombard you from the sky, a ship tracks the Monster’s movements, etc.) and 2) The losing team gets a damage bonus handicap. As one person I played with pointed out, if the Hunters lose the first four rounds, they have a huge advatage in the Finale. That person then went on to beat us in the Finale and skunk us 5-0. He was pretty good. 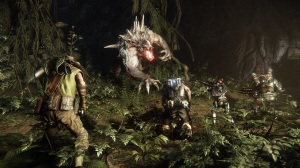 Picture this, except all the humans are dead.

There’s not much in the way of story in any mode, but the character interactions that occur in the drop ship piece together a surprisingly deep-feeling back story for each one. Not that that’s necessary; one of my favorite things about Left 4 Dead was that your characters were basically blank slate archetypes that you could draw your own characters for as you played.

The single player mode is surprisingly good. While I will take a decent human over AI as a teammate any day (especially in a position like Support or Medic), the AI Monsters are on point and very difficult to defeat.

You also get to customize your logo. Used correctly, this feature allows you to strike primal fear into the hearts of your opponents. I modeled mine after the greatest and most terrifying thing in the world: America!!! 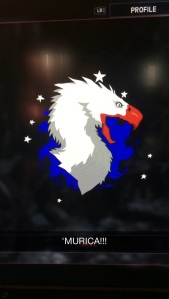 The levels in this game are as wonderfully varied as they are consistent. What I mean by that is that you’re clearly on the same planet, but the arenas themselves all offer unique challenges, especially for the Monsters. For example, I love the Kraken for his deadliness and mobility. But on one level his mobility was nearly useless because the stage was so small. In another game I had a great start with the Wraith but got trapped in a beautifully placed mobile arena with nowhere to go. Good hunters will use the terrain to their advantage. Same with good Monsters. I’ve been pounced on and finished off by Monsters who know how to isolate Hunters. 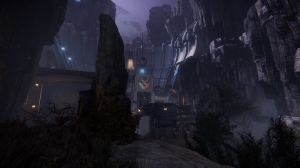 Evolve also does an excellent job of using sound and vibration to set the tone. From the opening cinematic with the Inception-style “Bwaaaaahhhh” to the hunting horns that sound as you close on the Monster, this game really knows how to set the mood.

I came across an review in Forbes that decried the basic concept of the hunt in Evolve, saying that there was too much downtime between battles. I think that’s actually a strength of this game. From the second you as a Hunter catch that first whiff of the Monster’s trail and set out to catch it, the adrenaline is pumping. Hearing that hunting horn or Daisy’s howl gets you going even more. By the time you catch that first glimpse of the Monster, all bets are off and it’s a struggle not to just lay on the trigger (not always the best strategy). Or maybe you haven’t seen it yet, but you can feel your controller pulsing and hear the booming of its footsteps. Then BAM!!! You get eaten by a Venus(Shear)-flytrap. In a dead sprint chasing the Monster? Better hope you don’t accidentally wake up a Megamouth. And if you’re the Monster? Forget about it. Being hunted means you had better be on your toes 100% of the time.

In my opinion, Evolve does excellent work keeping the tension high for the whole game, and the fact that you aren’t in constant head-to-head battle with one another is what makes the payoff so satisfying when you do meet.

Evolve combines well-paced, tense, and ultimately rewarding gameplay with superb balance and next-gen graphics to create a truly unique gaming experience. Although it doesn’t offer much in the way of story or single player, if you’re looking for a fun and unique game with mountains of replayability, Evolve is for you. Whether you enjoy the teamwork and variety of being a Hunter or the constant tension, adrenaline rush, and superiority of being the Monster, you’ll have fun. That much I can promise.

Approximately this much fun.