Eugen Systems is no slouch when it comes to in-depth strategy games paired with massive scale on top of complex systems. With a development pedigree that consists of Wargame: European Escalation and R.U.S.E, to name a few, the French company has set their sights on the “golden era” of strategy games in the vein of Command and Conquer (C&C:Generals to be perfectly honest). This is going to be reminiscent of C&C: Red Alert, right? That era of strategy games in the nineties and early aughts with absurd tales of competing world powers, perfectly married to live action hamminess, and performed by Hollywood’s B class actors!

Hold up, comrade. We need to discuss what Act of Aggression is and what it could’ve been.

In Act of Aggression, you choose from three different factions to battle with: The Chimera, The Cartel, and The U.S. Army. These three combatants represent a world fractured by a massive financial meltdown. This monetary implication has narrative importance, but outside of the campaign it means little. The Chimera are the super-NATO — the Republican party’s worst nightmare. Because of their United Nations status, The Chimera play like a swiss army knife; ready for any contingency with ruthless efficiency.Your “middle” faction.  The other factions play to their respective strengths: The U.S army relies on power projection through tanks, planes, and sheer will power without the technological advances of their counterparts. Finally, The Cartel is a small, mercenary backed army, mainly concerned with high-tech chicanery and stealthy… stuff. On paper, these three factions should play differently enough to offer nuanced gameplay in any skirmish, yet this isn’t what’s on display in Act of Aggression. When comparing the three factions of AoA to, say, those in the Command and Conquer series, we can see the cracks in the veneer.

Unlike Eugen’s prior games, AoA is hybrid of the “classic” base building RTS design of last generation, coupled with the complexity of more modern strategy fare. You will still need to have piano-player like dexterity to master the hot keys, and your base micro management is paramount for survival. Like C&C, you’ll also be collecting three resources: oil, which is converted into credits, aluminum, and rare earth materials. Credits are used initially to get your base up and running with basic units, while aluminum and rare earth materials are necessary for advanced tech and your eventual deployment of a faction specific “superweapon”. Each faction collects these resources a little differently, by air or land, but their consumption and economic importance are exactly the same. Also, each faction utilizes power producing buildings to expand their base, with The Chimera being a particular energy hog and The Cartel requiring significantly less 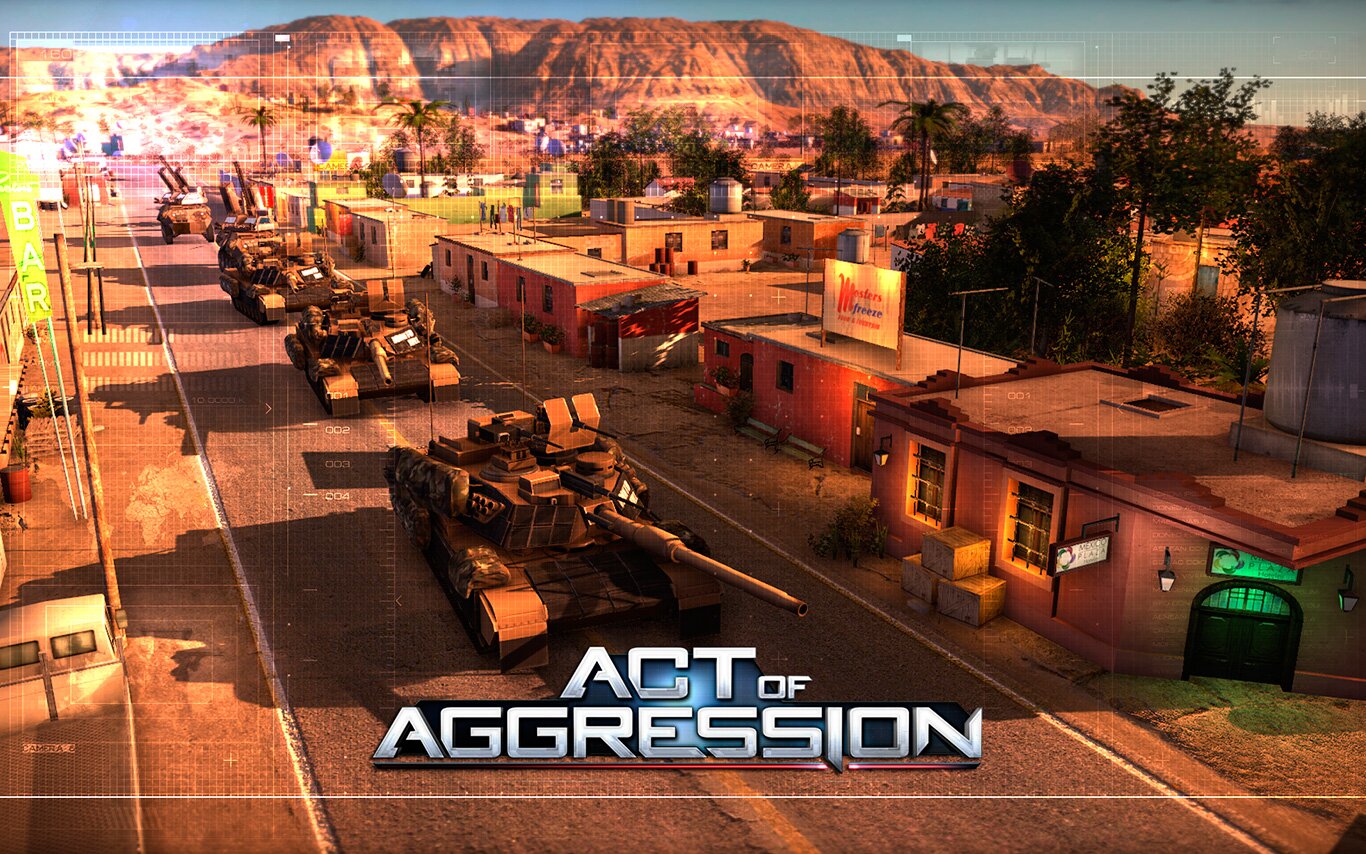 in the early game. Your base, no matter which faction you choose, will need to rapidly capitalize on the resources around the map (which is deceptively massive, even for a 1v1 match).

Because the size of these maps is huge, something that Eugen has always thought to be important, you will need transportation vehicles up as soon as possible. At this point in the game, AoA ramps up the difficulty in such a way that you can easily fall behind without realizing it. These areas of strategic play start to crumble under the intense pressure of your opponent, A.I. of course, as they ceaselessly rush your base. A proper tutorial would’ve come in handy — the campaign being the closest thing. For example, ambushing units from inside a building is extremely important, but this fact is not conveyed to you in a meaningful way. Or that your stealth units get a first hit bonus when attacking  — too bad I only see the numbers but there is nothing explaining why or how this happens.

Act of Aggression suffers from a crisis of identity. Unlike the games it’s trying to emulate, AoA comes off as an improper amalgamation of those goofy strategy games of yore, diluted with their super serious systems heavy games of Wargame and R.U.S.E. The spirit of C&C just isn’t here. The fetishistic obsession with real life weapons and vehicles is confusing in all of the wrong ways. I had trouble deciphering the units from one another, especially when, for example, America uses the Stryker tank for one of their light vehicles — the following is from the wiki

“The Stryker is a family of eight-wheeled, armored fighting vehicles of the United States Army.

If those names don’t jump right out at you, don’t worry. Act of Aggression is inundated with letter and number combinations connected to an indistinct chassis. With regular frequency, I couldn’t tell my vehicles apart since they all look so similar when you are zoomed to a strategic level. If you are dedicated to learning each vehicle and what it does just from the name or unit card, you will do well. If not, this game will punish you for not knowing the perfect counter vehicles to your opponents choices. This game strikes a balance between the cheesiness of C&C without the charm, and the Wargame series without the strategic depth. That’s not to say that there aren’t moments of dark humor, e.g.,  the Life Insurance upgrade for the Cartel : “ In the regrettable case of the death of a mercenary under contract with the Cartel, half of its recruitment fees are refunded”. Small touches like this are desperately needed.

You’ll be using the drone view a lot

After four skirmishes, I knew I wasn’t ready for the challenge set before me. So I launched up the campaign for a little breather. Well, that was the idea. The AoA campaign is secondary to the skirmish and online modes that will be the bread and butter for months to come. That’s a real shame. I remember playing the Red Alert campaign multiple times as it took on an almost cult like status with its Full Motion Video insanity. The opposite is true here. AoA plays like an overwrought Call of Duty campaign, too concerned with the implications of its future world to care about a compelling or fun story. The enemies in the campaign will spawn endless numbers of units and place them in the most frustrating spots on the map, causing campaign levels to last over an hour as your try and keep your units alive while balancing your dwindling resources. The Chimera and U.S. Army campaigns play very similarly with their massive unit build up and tank rush. The Cartel is the standout in this game as the most exciting faction both in the campaign and in skirmish mode, but their campaign missions are only playable after you get far enough into the Chimera campaign.

AoA has some good ideas underneath the hood; the tech deployment is interesting and varied throughout the game, letting your units adapt to the battlefield. There’s also a pretty sweet prisoner of war and wounded solider system. You can choose to capture prisoners of war after a battle for a little extra credit, with some factions allowing your to build a prison module to collect a steady stream of those golden coins. Again, The Cartel is the real standout in this game as you use their stealth advantage for some truly cat and mouse moments with the more rush based U.S. and Chimera teams. A competitive scene is possible with AoA and there are ideas that lend themselves to good strategic play, but the extent of this games mediocrity will be too much for most gamers to dedicate themselves to.

At the end of the day, AoA is a decent copy of the games it’s trying to pay homage to, but it doesn’t ascend past mere replication. Playing the campaign is a real test in patience and endurance as you feel the unfair advantages of the enemy become more and more egregious. When you switch over to the skirmish, hopefully you will know the systems well enough to hold you own against the rush happy A.I., even on easy. Next you will have to dedicate your time to recognizing the minute differences in your vehicular units, arguably the most important part of the game. It’s hard to say what AoA wanted to do. There are too many inconsistencies in Eugen systems latest game to allow it to surpass the rank of average, but if you want to stick it out and practice the games opaque strategies, you just might find a decent game underneath.

You can find Act of Aggression on Steam.