The Tick began life as a spoof of comic book superheroes and has come a long way since then. So far, in fact, Amazon is due to funding a full, live-action season. The pilot episode passed ‘try-outs’ due to being viewed over 15,000 times on Amazon Prime.

The Tick is the creation of Ben Edlund as a mascot for a comic book store in Massachusets. However, despite starting life as a spoof, Tick is now a beloved character in his own right. First of all, Tick got his own comic-book, followed by an animated series. Furthermore, Tick was given another, live action, show in 2001. 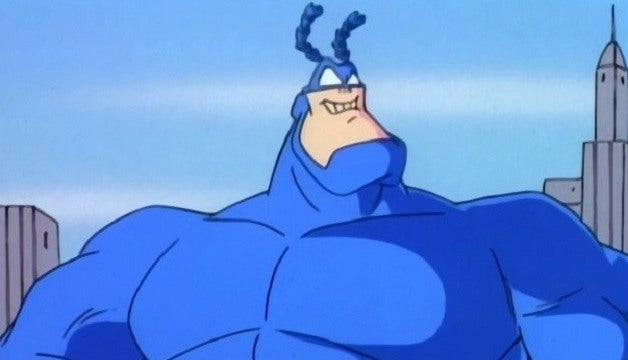 Check out that manly chin.

It seems like The Tick’s new series is going to be moving him away from his satirical roots a bit. According to Polygon.com;

“Unlike the previous Tick series that aired on Fox between the late ‘90s and early aughts, the new series is far more dramatic than it is satirical. In an interview with Polygon, Edlund said that he wanted to focus on the human drama and relationships that the Tick and Arthur develop instead of just making it a comedy.”

‘Arthur’ is the big T’s sidekick and he is a former accountant in a Moth costume, which lets him fly. The two of them defend ‘The City’ from threats and villains. Furthermore, the dynamic duo has help from an array of other superheroes. These include ‘American Maid’ (rather like Captain America meets Wonder Woman) and Die Fledermaus, a shallow, self-absorbed Batman parody.

According to Polygon, The Tick will be available in the US, England, Japan, Germany and Austria in 2017. Of course, this is only for Amazon Prime Subscribers. Peter Serafinowicz is playing the starring role, with Griffin Newman as Arthur.