Fallout 4 Gets Official Beer from Carlsberg Bethesda has announced their partnership with UK brewery Carlsberg to make the first ever Fallout inspired beer. It’s scheduled for release on November 5th, right on the heels of Fallout 4‘s release on November 10th. Bethesda says that it is inspired by Vault-Tec as well as the rest of the post-apocalyptic world seen in the Fallout series. Of the beer, we’re being told that it is a “4% alcohol by volume pilsner lager, with a refreshing zesty hoppy taste and a floral aroma.” 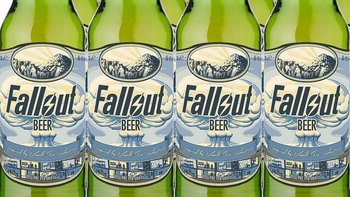 “This is something of a world-first. Adult participation in video gaming is a truly social activity, on a par with cinema and music.  We’re proud to work with Bethesda to produce a beer Fallout fans can enjoy,” says Bruce Ray, the Corporate Affairs Director at Carlsberg UK.

So, if you’re over the legal drinking age and want the perfect refreshment for what will inevitably turn into the destruction of your social life (we’re talking about Fallout 4, not alcoholism), then you can head to Amazon UK to pre-order a case of 12 for £29.99. Even if you’re a non-drinker you can still enjoy them as a collector’s item, something I am sure many will do. Unfortunately, it is only available to be shipped within the UK currently, but hopefully it will do well enough to expand to other areas.